Some years ago I decided to compile a list of common foods and the nutrients they contain with a description of why these nutrients are beneficial for our health.

I am sure you have found yourself saying that a food happens to be good for you or you have heard people say the same thing, but the burning question is why are they good for us.

The diet of most people on the planet consists of taste-good food regardless of its nutritional value.

We as humans have a certain air of arrogance believing that we can eat what we like and not suffer any consequences.

The animal kingdom is far more regimented in that they eat what they are designed to eat because they have little choice in the wild which has a protective effect against disease, except if the animal is some other animals meal.

If any animal is maintained in captivity, generally they are fed on food that they are designed for, unless its an industrialised farm animal like a cow that is sometimes chronically abused by being fed corn instead of grass, given a bovine growth hormone to increase milk yield and then administered antibiotics to eliminate infections caused by the wrong food and the growth hormone..

Most humans regard food as a pleasure, which it is, but that is not its main purpose, it is fuel to maintain health providing nutrients that are essential for the body.

Let us explore a little further into why common fruits,vegetables, grains and seeds are beneficial to our health.

All compounds that the plants produce have a purpose for their continued survival, and some of these compounds provide health benefits to the consumer.

This series of articles are the sister articles of the ’90 Essential Nutrients’ which explains the physiological function of Vitamins/Minerals/Amino acids and fatty acids.

In this series we are going to discuss these essential nutrients that are supposed to exist in the various foods that we all should be consuming, that is fruit,vegetables, nuts, grains and seeds.

There is a catch, however, we know what these foods are supposed to contain, by natures design, nutrients for particular foods, but this relies on the agricultural soil that they are grown in.

In theory, if any of these foods are harvested from land that contains all natures nutrients as they once were eons ago, when even before when they were covered in ocean water, or unless the soil is replenished with all the necessary nutrients other than NPK (Nitrogen, Phosphorous Potassium), than, there is a fair chance that our food is missing many nutritional substances.

My take on this somewhat controversial scenario is that if you take the 90 essential nutrients in a whole food supplement like ‘Body balance’, and than any other nutrients you might consume from food is a value add, so don’t just rely on food as your main source of nutrition, rely on a supplement that the body is designed to assimilate.

Furthermore, health food stores have a plethora of health giving supplements that can also add to your overall nutrition such as sprouted vegetables like wheat grass, radish, alfalfa, broccoli etc, so there is a large range to choose from and I will cover some of these products as well.

Suffice to say there is not a food that exists on the planet that does not contain some type of phenolic compound. All  grains,nuts seeds, oils, fruit, vegetables,meats,fish,eggs, dairy contain phenolic substances, in fact all natural fats, proteins and carbohydrates contain them.

Allelopathy defines a biological phenomena where plants manufacture biochemicals to synthesize germination, growth, survival and reproduction of other organisms.

Plants defend themselves from herbivores such as insects, birds and mammals by negative allelopathy by releasing allelochemicals known as secondary metabolites that either act as repellents, toxins or to reduce plant digestibility.

Plants are intelligent and they can grow in places that are inaccessible to some herbivores, and they can change their seasonal growth patterns, divert the herbivore to consume the less essential parts of the plant or encourage natural enemies of herbivores to protect itself.

Nature has evolved to maintain balance between plants and herbivores, since, like all natural organisms, they possess an inexhaustible will to survive.

In essence, plant organisms have developed a defense arsenal made from nitrogen compounds such as alkaloids like nicotine, caffeine, morphine, cocaine and strychnine, and alkaloids that almost uniformly invoke a bitter taste.

The other components in the plants arsenal are Terpenoids and Phenolics.

There are over 10,000 known terpenoid types including the basis of volatile essential oils like citronella, limonene, menthol, camphor and pinene.

Plant steroids and sterols are produced from terpenoid precursors which include Saponins that lyse ( destroy) herbivore’s red blood cells.

In terms of plant defense, phenolics like Tannins inhibit herbivores digestion and interfere with protein absorption and digestive enzymes.

Phenolics tend to provide the various color pigments to plants.

Some plants even use fatty acid derivatives, amino acids and even peptides.

Finally plants can have mechanical defenses such as sharp thorns, and coconuts that have a very hard protective shell so only smart monkeys or humans can crack the shell for example.

Interestingly,  some phenols that you might be aware of include Cannabinoids ( as in Cannabis or as it is known as Ganja the weed of wisdom in Jamaica), Capsaicin ( in Chilli peppers ), Carvacrol ( in Oregano), Estradiol ( the main estrogen component ), Eugenol ( in clove oil),

If we look at our first chart below, showing the nutrients contained in celery, it contains others acids which are actually Polyphenols namely 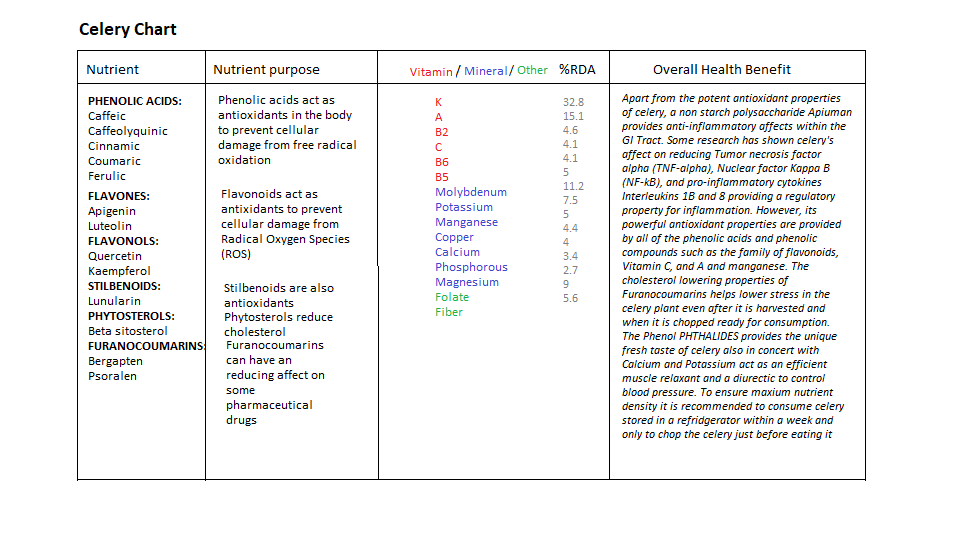 Science has discovered that these compounds as in all phenolic compounds exhibit potent antioxidant, anti inflammatory and anti clastogenic ( i.e mutant genes and/or chromosomes) effects on the human body.

To orchestrate these benefits, they down regulate important biological pathways such as the PI3K/AKT/mTOR intracellular pathway that regulate the cell cycle in terms of quiescence, proliferation, cancer and longevity.

Down regulation of transcription protein complexes such as NF-kB (Nuclear factor Kappa B) that regulates the immune response to infection, so it turns on inflammation given particular circumstances.

NRF2 or NFE2L2 (Nuclear factor like 2), another transcription factor that regulates the expression of antioxidant proteins protecting against oxidative damage.

These phenolic compounds also have an effect on the protein family STAT (Signal Transducer and Activator of Transcription) pathways that are involved in the development and function of the immune system in terms of immune tolerance and tumor surveillance.

* These checkpoints are referred to as G1,S,G2,M.

*The cyclin gene expression is a 24 hours oscillatory process. The G1(restriction) checkpoint verifies DNA integrity, and if there is DNA damage due to say lack of nutrients this biological process will decide upon DNA repair or just destroy the cell via apoptosis.

This is performed by the induction of the P53 pathway (P53 is the bodies master tumor suppressor gene) that institutes Cell cycle Arrest, which is basically a stalled state until the cell cycle mechanism decides what to do.

Each cycle is under a time constraint so it needs to make a quick decision.

Phenolic compounds not only include simple phenols, but they include a diverse family of flavonoids, lignins and lignans, tannins, xanthones, and coumarins.

Within the flavonoid family which include several thousand (approx 8000 are known) are Flavonols,Flavones, Flavan-3ol or Catechins,Flavonoids, anthocyanins and Isoflavonoids which we will cover in this series of articles.

“If we could give every individual the right amount of nourishment and exercise, not too little and not too much, we would have the safest way to health.”