When Kelley, in my opinion, the modern day pioneer of Metabolic Typing, designed his elaborate dietary recommendations it was directed to sick people whom he wanted to heal.

It obviously can be used for the same purpose, but it is useful as a tool to provide people with the potential to have optimum health by eating the correct food for their Genotype (Genetic build), their Phenotype (Characteristic traits) and their ultimate metabolic functioning.

Nobody but you can know what food is best for you by the way you react to food and how it makes you feel.

You can for years eat the wrong food for your body without supplementing and still feel okay but many bodily adaptations negatively manifest themselves quietly without symptoms or pain,while your body is degenerating slowly, and then one day you may feel pain or loss of energy which does not improve.

The purpose therefore is to prevent getting to this point, and people are surprised how good they feel once they improve their eating habits and improve their lifestyle and no more feeling ‘crappy’ when they wake up in the morning.

I know the approach of Metabolic typing is a little scientific compared to just following a diet, but if you go down the road of the latter then it is only by chance, not by design, that your food and supplement choices may improve your health.

I quote from the wonderful little book called ‘The Wonderful World within You’ by Dr Roger Williams (1977):

‘This book is about you. I hope you will live happily ever after, you will have to write the happy ending yourself’

Let us first honor the brilliant work of William Bayliss (1860-1924) and Ernest Starling (1866-1927) the two British physiologists who discovered the peptide hormone Secretin (a hormone triggering signal activated by the body’s ‘fire department’ sent to the pancreas to release bicarbonate into the duodenum to neutralize the flood of acid from the stomach during the digestion process).

It was during one of their experiments where they discovered that it was not the nervous system that triggered the injection of pancreatic ‘juice’, but through ‘humoral’ channels or the bloodstream, and this chemical signal (Secretin) was coined ‘Hormone’ (a greek word meaning ‘I arouse or set in motion’).

While experimenting with the uterus, ovary and placenta, Starling discovered ‘Mammae’ (this was probably estrogen which is actually a group of hormones Estrone, estradiol and estriol), trying to establish what stimulates the growth of the mammary gland.

It was Henry Harrower MD (1883-1934) who talked about endocrinology organs which include the Adrenals, Thyroid, Hypothalamus, Pituitary and Gonads that are Sympatheticotonic or Catabolic Glands while the Parasympatheticotonic (Vagotonic) or Anabolic glands include the Pancreas, Parathyroids, Pineal Gland, and the Liver. (The thymus is only active up to puberty, its purpose is to help mature the immune system, once this is complete this gland becomes a non functional fatty tissue).

In essence the ANS produces kinetic energy (sympathetic) and stores potential energy (parasympathetic) by cooperating with the digestive system  taking the energy from metabolised food and storing it in the tissue.

The brilliant design of the body shows itself within the endocrine system because the various glands work in cooperation with each other (generally in groups of 3) which is very evident if one gland become compromised.

An example is the thyroid, adrenals and the gonads.

If one gland becomes compromised (a medical term that is often used is ‘Dyscrasia’, a greek word meaning ‘bad mixture’ or in modern day nomenclature Imbalance ), then its cooperative partners will take up the slack to maintain ‘Homeostasis’.

In previous articles we discussed the situation where the liver becomes overloaded, attempting to clear the toxic load and then rejects the onslaught and offloads it to the secondary detox organ, the Lung.

However, in the interim, the cooperation of the Thyroid, Pituitary and Adrenal team sense the toxic load in the bloodstream and release more hormones signaling other organs that can help expel the toxic excess.

This situation cannot continue over time or the endocrine organs will begin to tire (Adrenal fatigue) so this is where diet becomes crucial..low starch steamed vegetables is the answer providing organic alkaline minerals that the liver needs, and when it ‘gets back on its feet’ you can juice some ginger, celery,cucumber, parsley and kale.

Genetics..Genetics..What am I to do?

Conventional medicine continue to causatively label many Dis-eases as genetic, where on example, diabetes, and I quote ‘hands down one of the most common endocrine disorders’, unquote.

Allopathic statements like ‘find out if your family has a history of diabetes’ or genetic factors, playing a role in endocrine disorders such as diabetes, autoimmune thyroiditis and Hashimoto’s thyroiditis.

In my article series on the microbiome I stated that Thyroiditis is generally caused by physiological imbalance and the only genetic link is the inheritance of a dysbiotic microbiome from Mum.  Correct the imbalance and move on, and you don’t have to report to the hospital every year for tests as they suggest..or are we all just walking disease infested homo sapiens…lol

Henry Harrower, whom we referenced above, published his treatment modality of Organotherapy where extracts from a particular organ like the thyroid are ingested to help the organ if it is dysfunctional.

The treatment today is Hormonal Replacement Therapy (HRT) where women are given estrogen and/or progesterone to ‘replace’ those hormones that have declined after menopause.

However, in 2002, and in studies thereafter, began linking HRT to cancer, and according to Christian Nordqvist of Medical News Today, many thousands of women have perished having been denied this therapy from reluctant physicians who were aware of the negative studies.  The problem with ‘forklifting’ an endocrine organ with its own substance over a long period causes that gland to gradually shut down, causing more imbalance ( namely the futile attempt to balance the 3 estrogen components which only the body can do) which is probably the reason for the increase in cancer incidence from this procedure. Although I might add George Redmayne Murray (1865-1939) uncovered a cure for Myxoedema (a form of Hypothyroidism) by subcutaneous (under the skin) injections of thyroid extract in 1891.

Homeopathy practice another form of Organotherapy to redress endocrine organ balance using Organotherapy drainage detoxification.  Emil Kraepelin a psychiatrist suggested using autointoxication, organotherapy and surgery for Dementia Praecox (Schizophrenia)…wait a minute this guy was onto something, if you have read the article on the microbiome and disease we discussed gut dysbiosis and the overgrowth of commensal bacteria releasing excessive toxins which simulate intoxication from excess alcohol.  Once these toxins continue to breach the BBB (Blood Brain Barrier) overtime could potentially cause Dementia.   This is what Kraepelin referred to as ‘Autointoxication’ or self poisoning of the body.

We also know that Theodore Deecke, a pathologist from the New York Lunatic asylum, suggested in 1874, in the American journal of Insanity, that the germ theory of disease was applicable to the study of insanity (…another brush with the truth, well not the germ theory but certainly with Bacteria).  Again, we witness these Scientists and physicians of old gradually placing the pieces in the enigma called Medicine…what have I said before..’look to the past before you progress into the future’.

The question is can we identify endocrine or hormonal imbalance?   The answer is a categorical YES.

People like Dr. William Sheldon (1898-1977) who created the ‘Somatotype’ classifying Endomorphic, Mesomorphic and Ectomorphic people correlating their body types with behavior, intelligence and social hierarchy   In modern day Dr. Elliot Abravanel a physician and diet counsellor suggested that people’s body type are primarily Thyroid, Adrenal, Gonadal or Pituitary type.  Whereas  Dr. Berg from New England is a chiropractor and naturopath  who has helped some 3500 patients to lose weight suggests that the dominant body types are  Adrenal, Thyroid,Ovary and Liver, as you can see from the diagram 1 below: 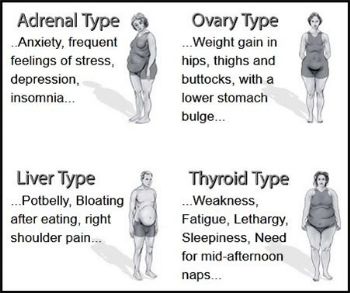 This is a form of imbalance caused by an incorrect diet can influence the overall metabolic typing diet. The recommended diets for each body type is given below:

“In physiology, as in all other sciences, no discovery is useless, no curiosity misplaced or too ambitious, and we may be certain that every advance achieved in the quest of pure knowledge will sooner or later play its part in the service of man.”

“But, as Bacon has well pointed out, truth is more likely to come out of error, if this is clear and definite, than out of confusion, and my experience teaches me that it is better to hold a well-understood and intelligible opinion, even if it should turn out to be wrong, than to be content with a muddle-headed mixture of conflicting views, sometimes miscalled impartiality, and often no better than no opinion at all.”