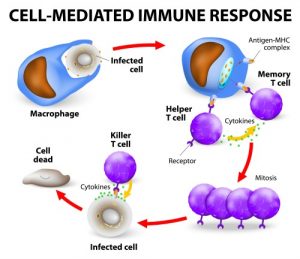 It never ceases to amaze me that as science uncovers more intricate knowledge of human functional systems, the more poking and prodding scientists want to do in terms of restoring health.

It is human nature to control everything,  coupled with the need to dominate, and yet if left to its own devices, fed with appropriate fuel, in the main, the body can take care of itself, except if structural damage occurs that requires intervention.

The body is able to regenerate, heal and defend itself from foreign invasion like viruses, fungi, toxins and pathogenic bacteria using its own natural defenses, the immune system, providing the overall bacterial ecosystemiis in balance.  Our microbial partners, found all over the body, provide us with immunity, among other things.  The immune system exists as a fertile, well seeded environment, supporting beneficial, Commensal(opportunistic) and pathogenic flora, commensal that can become beneficial or pathogenic.

The symbiotic relationship between the microbiome and the host immune system in terms of pathogenic bacteria control is the immune system’s ability to trigger a response from either an inbound foreign microbe or a pathogen derived from the commensal colony of the microbiome.

Furthermore, the mechanism to maintain the relationship with the microbiome also applies to the containment of a potential pathogen.  This is why the GI Tract and the skin have the most dense number of immune cells near the colonies of commensal flora; analogous to the proverb:

‘Keep your friends close, but keep your enemies closer.’

To maintain their ecological niche, the microbiome exercise a dominant position over the immune system, to maintain  epithelial barrier integrity and the containment of their own colonies.

On the other hand, to ensure the state of homeostasis, the immune system minimises microbial contact with this mucosal ‘firewall’ to reduce inflammation and microbial translocation.

This is achieved by the mucosa proper, and the secretion of Immunoglobulin A (IgA) secreted by Lymphocytes to neutralise antibodies to protect the mucosal membranes located in all breathing orifices, bladder,saliva, tear ducts, sweat glands , including the epithelial surface protecting it from pathogenic attachment.

Furthermore, use is made of antimicrobial peptides ( such as Reg IIIγ secreted by the epithelium to create a segregation or ‘demilitarised zone’ between the microbiome and the host intestine) and immune cells.

It is of interest to note that the Mucosal IgA does not possess any memory capabilities but IgA secretion produce clones that contend with the potential changes that occur within the microbiota.

The entire length of the digestive tract within the small intestine is a high concentration of our resident microbiota coating  the gut epitheliuem which is our natural barrier between the environment and our internal domain protecting us from harmful invasion.

When external and internal pathogenic bacteria, toxins,viruses,fungi and indigested food particles come into contact with our epithelial barrier the immune system triggers a defensive response.

This is referred to as TH1 response as opposed to an injected substance ( e.g Quackzenes ) which is a TH2 response.  Within the gastrointestinal tract (GI), the smaller intestine is the home of the nutrient absorbing microvilli Enterocytes as explained in my article ‘Microbiome and digestion’.

These enterocyte cells are situated along the surface of the epithelium within the mid section ( Jejunum ) and end section (Ileum) which total 5.5m in length. 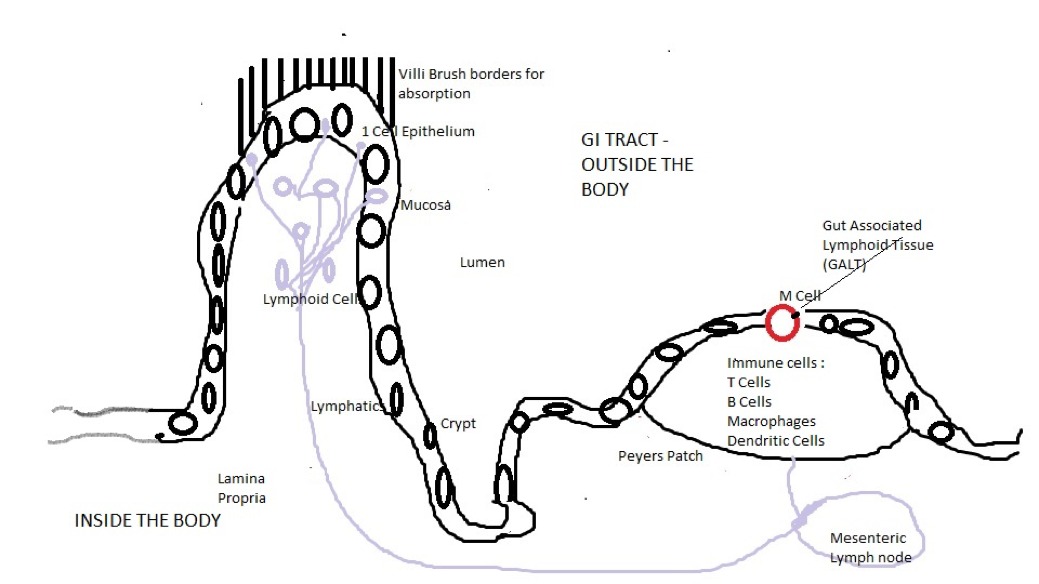 From Fig 1 scattered along the mucosa are dome like structures called Peyers patches which are lymphatic tissue located throughout the ileum region of the small intestine, that are part of the immune system responsible for monitoring microbial colony activity.  Both the Villi and Peyers patches drain into the mesenteric lymph nodes and since they monitor bacteria activity they make the ideal site to initiate immune response and a tolerance gateway for harmless bacteria and food particles.

These patches contain a mix of immune cells including T and B Lymphocyte cells, Macrophages and Dendrites.  The T Cell is responsible for sending chemical instructions (called ‘Cytokines’) to other parts of the body when a foreign invader is encountered, so effective weaponry can be administered.

The T Cell also is capable of killing virus infected cells directly and they assist B Cells in the manufacture of antibodies to bind with antigens. The B Cell produce Y shaped proteins ( antibodies ) that stick to antigens on the surface of bacterial pathogenes which are used as identification makers; ‘Marked for Destruction’ by patrolling phagocytes ( Neutrophils ).

The macrophage cells are a type of white blood cell ( immune cell ) that seek out and consume any substances that are not healthy body cells including foreign microbes,cancer cells etc.  The dendritic cells are responsible for processing antigen substances and presenting it to the T Cells.

It is the bacterial species Bifidobacteria that activate the the T & B Lymphocyte cells using a secreted substance Muramil Depeptide (  This substance is a  Peptidoglycan which is the protective structure  of the bacterial cell wall and the peptidoglycan fragments are used by bacteria to signal or manipulate mammalian immune systems); this substance is also used as a Quackzene adjuvant..well its better than Mercury of Aluminum).

Lymphocytes that generally congregate along the epithelial defensive barrier secrete their own substance called Immunoglobulin (Antibodies) A (IgA) for purposes as explained above. The following paragraph explains how Mucosal Immunity Response is activated. 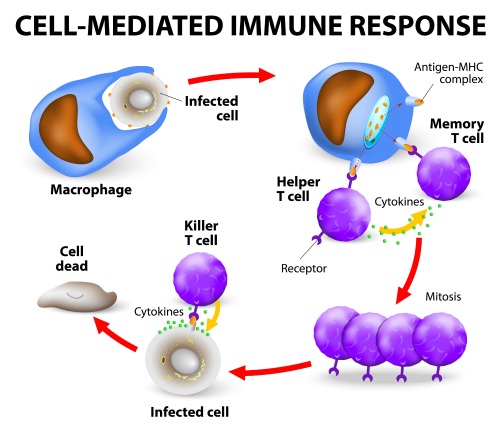 When bacteria or food particles are encountered at the epithelium these antigens are intercepted by Microfold or M cells  (shown in Fig 1 ) that reside in the Gut Associated Lymphoid tissue (GALT) of the Peyer patches, and in the Mucosa Associated Lymphoid Tissue ( MALT) within the GI Tract.

It is at this point the immune system goes into action, as described in the following text.

These M Cells initiate Mucosal Immunity response by transporting antigen material across the epithelial barrier from the gut lumen to the Lamina Propria via a process called Transcytosis.

Here the transported antigen material are presented to the Dendritic cells that extend dendrite links between epithelial cells sampling and breaking down the antigens.

With their cargo of processed antigens the dendritic cells traffic themselves to the T Cell lymphocyte regions and upon encounter with the T cells they present their cargo of antigen particles to the surface of the T cells which are then activated by the dendritic cells and converted into immunomodulatory cells called regulatory T Cells ( T Regs ).

The T Regs then migrate to a region of the lymphatics within the Villi called the Laminar Propria. This is the point at which an inflammatory response is required or not, if not the T Regs secrete a signalling substance called a Cytokine ( its action is similar to a hormone )  which in this case is Interleukin 10 (IL10 ) exerting a suppressive action on immune cells residing in both the Laminar propria and the epithelium. IL10 is critical to maintain immune quiescence.

If, in the event of a required inflammatory response  IL10 secretion is reduced by the T Regs  and the dendritic cells secrete inflammatory substance Cytokines *  IL6 ,IL12 and IL23.

The target cell is coated in Opsonins (Greek word for ‘prepare to be eaten’ ) process, where the cell is marked or made more ‘delicious’ ).  The Neutrophil recruits clear the invading bacteria or food particle, which is achieved by a special weapon in its arsenal  a ‘Neutrophil Intracellular Trap’ providing a local concentration of antimicrobial components to bind, disarm and kill the invaders extracellularly, independent of phagocytic uptake, as well as preventing the spread of  further pathogenic activity.

At this point the assault is repulsed and any remaining Neutrophils die off through apoptosis ( a non inflammatory cell death, but in this case probably via the Opsonin process again to tempt the  Macrophage appetite ).

The site is cleaned up by Macrophages ( an immune cell ‘janitor’ and also a phagocyte that engulfs and digests cellular debris, microbes..basically anything other than healthy body cells ).

Epithelial integrity is restored and damaged cells replaced by new cells derived from the villi crypts and finally T Regs are recruited again to calm the response.

The word “cytokine” is taken from the Greek words meaning ‘Cell Movement’.  Although similar in functionality to endocrine hormones, these small protein signalling molecules tend to be pleiotropic ( multiple activations from one signal ) as opposed to hormones that circulate in less variable concentrations and are made by more specific cells.

The class of cytokines referenced in this article are the Interleukin class that act as mediators between leukocytes such as  IL6 a T Cell Costimulant, IL12 that promotes T Cell response and macrophage activation. IL23 which promotes T Cell proliferation, Tumor Necrosis Factor Alpha which mediates the recruitment of neutrophils and macrophages to sites of infection or bacterial invasion and to stimulate endothelial cells to produce adhesion molecules.

Interferon Gamma that activates endothelial cells and macrophages, IL17 in concert with IL22 ( produced by activated dendritic cells (DC) and T Cells initiating innate (Virgin signals not yet learnt as in adaptive immune response) immune responses, that both contribute to a homeostasis dialog with commensal bacteria.

On a darker note, it would appear that our friends in Pharma places have developed cytokines into protein therapeutics using recombinant DNA methodology ( for those that are non initiated, this is genetic modification ) such as IL2 to treat cancer..well that might be game changer..NOT.

You Can’t Live without your Microbiome

The understanding of the regulatory process between the Host and the Microbiome in terms of the maintenance of homeostasis is still in its infancy, but what we do know is that without commensal bacterial regulatory signals the establishment of tolerance or active suppression of inflammatory responses to any orally ingested antigens like food would not be possible.

Lactobacilli species has the ability to promote a hostile environment for pathogens by lowering the PH within the vaginal area. A certain species of E.Coli produce protein based Bacteriocins to kill off competing species, thus controlling the growth of enterohemorrhagic E.Coli, a strain that is known to cause gastroenteritis, but most, if not all, produce their own toxins for survival.

Scientists have discovered various examples of our commensal flora fighting infection such as Peptidoglycan that improves the destruction of Streptococcus Pneumoniae and Staphylococcus Aureus ( an infectious bacteria that affects soft tissue areas such as the skin ).

Apart from our commensal flora preventing infection they are natural adjuvants for the host immune system thereby training, tuning and calibrating it.

Osmosis: “Yo! You see this badge? You see this gun? You see this gooey, white saccus membranous ’round my personhood?… Well, you dealin’ with a white blood cell here!  I should be out in the veins, fighting disease, not in the mouth on tartar control.”